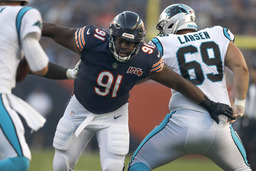 Goldman, 28, started 73 of 81 games in six seasons with the Bears. He was a second-round pick from Florida State in 2015 and likely will compete for a starting job at nose tackle in the Falcons' base 3-4 defense.

The 6-foot-3, 325-pound Goldman will join Grady Jarrett as veterans on the defensive front in the Falcons' base 3-4 scheme. Goldman played in 14 games, including 10 starts, in 2021.

The addition of Goldman addresses a glaring need on the defensive line for the Falcons, who were 7-10 in 2021 under first-year coach Arthur Smith. Atlanta did not re-sign free agent Tyeler Davison and are counting on such young linemen as Marlon Davidson and Ta'Quon Graham to play a bigger role this season.

Jarrett, a two-time Pro Bowl selection, is returning after signing a $51 million, three-year contract extension that continues through the 2025 season.