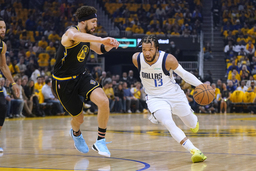 DALLAS (AP) Luka Doncic drew laughter from reporters by saying he would take about a week off after Dallas lost to Golden State in the Western Conference finals, ending the longest season of the young superstar's career.

The question won't be a joke when Doncic is asked how much he weighs when training camp opens in about four months.

The 23-year-old's conditioning and how the roster fits around him will be the hottest offseason topics as the Mavericks try to build on their first trip beyond the first round of the playoffs since their only championship 11 years ago.

"Basically I didn't stop playing basketball since the start of last season NBA," Doncic said after a 120-110 loss to the Warriors in Game 5. "I'm going to take probably one week off basketball and then back to it. The healthiness is the most important thing in basketball. If you're not healthy, you're not going to play."

Or in his case, if you're not in shape, you're not going to play well.

Doncic was criticized early in the season for that - and acknowledged it was an issue - as he struggled by his lofty standards and the Mavericks started slowly under first-year coach Jason Kidd, the point guard on Dallas' title team.

Doncic didn't get much of a break in the last offseason after Dallas' first-round loss because the season started late. The All-Star then carried Slovenia to its first Olympic berth, then the semifinals in Tokyo before two losses kept his home country from a medal.

A COVID-19 absence during the season was extended to give Doncic time to work on his conditioning and recover from an ankle injury. He returned about the time Dallas started its surge from 16-18 to the fourth seed in the West at 52-30.

Kidd said he would visit Doncic this summer on his "home turf," and hinted that conditioning will be part of the conversation.

"I think the next step is just understanding how long the season really is if you want to win a championship," Kidd said. "And I think this is a good start for them."

The Mavericks gave up on pairing Doncic with Kristaps Porzingis, trading the 7-foot-3 Latvian to Washington and changing the mix around their star. It was the first big move for new general manager Nico Harrison.

Now they will again face the question of whether Doncic needs a co-star, starting with whether to re-sign Jalen Brunson. A second-round pick the same year Doncic was drafted third overall, Brunson boosted his value by averaging 21.6 points in the playoffs.

"We're going to get together and really focus on the type of J-Kidd player," Cuban told Bally Sports Southwest after the game. "Guys who can guard multiple positions that are tough, that know their role, that are physical, that have a motor."

Spencer Dinwiddie was the key piece coming from Washington in the Porzingis deal. He will have more help at shooting guard in Tim Hardaway Jr., who didn't play again after breaking his foot in January.

Reggie Bullock and Dorian Finney-Smith have important roles as defenders and 3-point specialists. The Mavericks thrived in the playoffs when either one of them had a good shooting night.

"This isn't an old group at all," Dinwiddie said. "Most of the talent is under 30. Our superstar is 23. There's no reason we can't get better. It all depends on the mentality and the approach in the offseason."

Doncic had perhaps the worst half of his playoff career when the Warriors built a 17-point halftime lead in the clincher. It was hard to blame him after such a stellar start to his postseason career, including a 35-point average in elimination games. Kidd said as much while hinting at the mindset on building the roster around Doncic.

"So just understanding that we need Luka to go big a lot of nights just to give us a chance, and unfortunately the ball just didn't go for him tonight," Kidd said. "I think he carries the load as well as anyone, and I think for us as an organization, we'll help lighten that load as we go forward."